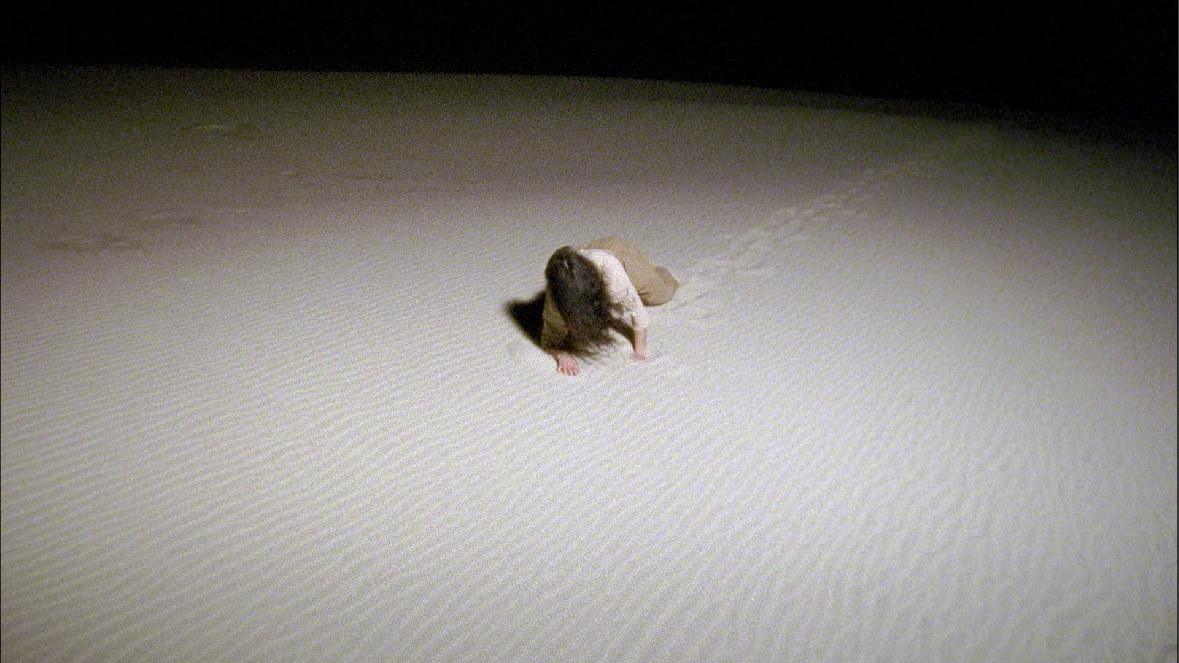 Please join us on Friday the 7th of December from 7:30pm—9pm for Alienation, a special film program in the context of the exhibition Leviathan, curated by Daniela Arriado (director Screen City Biennial, Norway). The film screening is part of the Screen City Biennial Migrating Stories program and focuses on the gap between a vision of global co-existence and fear of the other and the construction of alien realities. The program will be followed by a conversation between Daniela Arriado and Nathanja van Dijk.

Swerve (You’re Gonna Die Up There) sets out to reconstruct the illusion and history of cinema with an undertow of Cold War symbolism. It is only moments since the girl Regan Theresa MacNeil interrupted the party, addressing Captain Billy Cutshaw with the eerie forewarning: You’re gonna die up there. Now, the astronaut Billy Cutshaw—who first appeared in The Exorcist (1973) prior to a space mission, and later as mental patient in The Ninth Configuration (1980)—is driving through the dark streets of Washington DC. During this drive, he will meet his future self, who will convince him not to go to the moon. Against the background of this meeting, the work reflects on the psychological and also social and societal implications of space travel.

An alien has landed on a foreign planet, where life once existed. The alien moves around aimlessly through dark shifting nature, occasionally coming across appearing then disappearing glimpses of frozen figures, humans, poised in time and action, in a deserted wilderness where the sunlight is now out of reach.

Some stories sound fictional, but the fears and events behind them are certainly genuine. In 2014, the residents of a refugee home in a former high school in the Moabit neighborhood of Berlin told Zielony that they heard voices and saw ghosts in the showers at night. As it turned out, one of the city’s largest synagogues had once stood nearby, as had a railway station where Jewish citizens had been herded onto trains to the concentration camps. Zielony conducted interviews and shot footage he assembled into a film (Ghosts, 2016). Voices sometimes speak up when we least expect them to, and even when we hear them – some of us prefer not to – we do not always believe what they tell us. Zielony’s film captures the fear and anxiety that the barrier between the past and what is happening today might be lower than common sense likes to imagine.

Private belongings are material testimonies of personal histories, which evoke feelings, thoughts and ideas connected to past experiences. In the context of war and survival, such objects become both comforting and hurtful signifiers of a world that has been lost or is no longer accessible. In many cases, they are kept and cherished, even achieving a certain degree of sanctity while also operating as a continuous reminder of the devastating past. Yael Bartana’s video Tashlikh (Cast off) serves as a platform for both perpetrators and survivors of genocides or ethnic persecutions to confront their personal, material links to the horrors. Inspired by the Jewish custom of 'Tashlikh', in which sins are casted into the depths of the sea, Bartana’s work generates a ritual that consists of the deliberate discarding of objects as a means of psychological liberation.

It Was a Time That Was a Time is the result of a free-form, collaborative filmmaking experiment. Participants took turns documenting each other living in a speculative community formed in response to a theoretical environmental cataclysm, with devices that might have survived a devastating flood. As the artist explained, in this possible post-apocalyptic community, surviving on the periphery of New York, rules of society, gender and relationships are given new expression. Operating on the borders between speculative realism and performance, the piece was primarily filmed on Coney Island in the aquarium that was notoriously flooded during Hurricane Sandy. Participants and collaborators included Brooklyn-based artists, costume designers and choreographers, as well as youth participating in Red Hook Initiative—a nonprofit that organizes empowerment programs for the neighborhood.