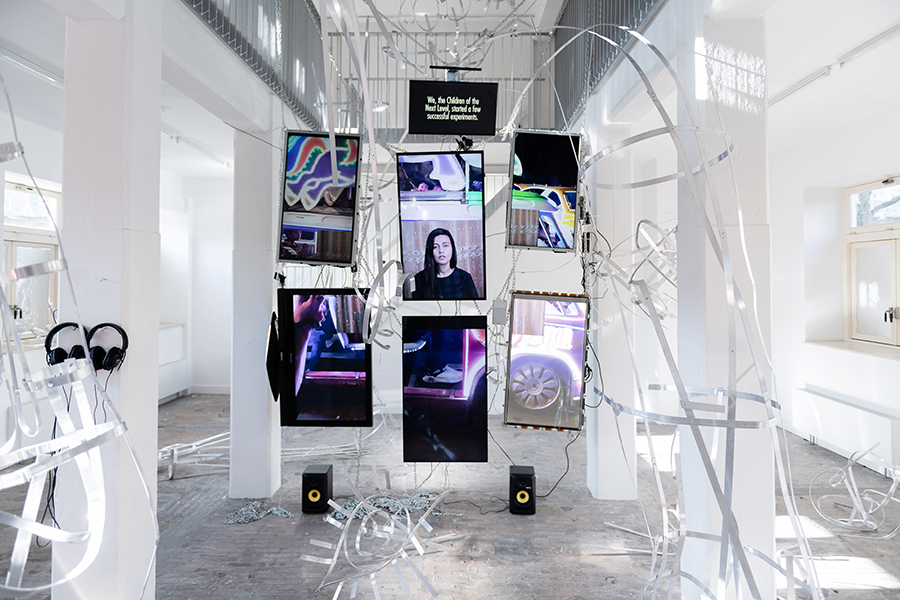 In his socially engaged artistic practice, Johannes Büttner raises questions such as: What role does artistic labour perform in our society, and how does it compare to other forms of work? How are aesthetic experiences produced and consumed within capitalism in a neoliberal society? In what way is the ‘gig economy’ reshaping our ideas about productivity, value and growth? Büttner often collaborates with people from outside the art world, for example body builders, metal thieves, food delivery riders, or bakers, to complicate the role of the audience and to consider our mutual desires, dreams, fears and prejudices, on both an individual and collective level. For his newly commissioned work The Factory (2020), Büttner employs the digital working-class in the collective development of a contemporary Gesamtkunstwerk.

“Slavery is back, the mouse click being the new whip […] nowhere is capitalism dirtier than in the lair of the web economy,” the newspaper wrote not too long ago. The flexible labour market and the rise of working via apps and digital platforms in many cases lead to the devious exploitation of a new, digital working-class. The so-called gig economy is an economy in which temporary work is the norm and in which self-employed workers are temporarily hired. Gig workers often earn their income by combining many different activities. Permanent jobs make way for short-term ‘gigs’ and independent entrepreneurs replace permanent employees. This climate informs a labour market that will be characterised less and less by permanent employment or by sustained relationships with the same employer. This development has only been reinforced by the internet and by the emergence of apps, capital platforms (such as Airbnb and Marktplaats) and labour platforms (such as Uber, UpWork, Deliveroo, Mechanical Turk, Helpling, TaskRabbit and Fiverr). These platforms match supply and demand with low transaction costs. The growth of the gig economy leads to countless questions—there is a lot of uncertainty about its size alone. It also proves challenging to determine the legal position of gig workers.

In Wenn ich nicht hier bin, bin ich auf’m Sonnendeck, Büttner searches for ways in which the digital working class can regain power. Based on an American patent, in which a method for manipulating the nervous system by low-frequency electromagnetic fields from TVs and computer screens is discussed, his workers—almost unnoticeably—rebel against the status quo. Through the creation of a sci-fi narrative, co-authored with ‘workers’ from China, Indonesia, Nigeria, and Tunisia, Büttner asks how labour power carries the potential for transformation in a context where the supply and demand of work is mediated by a digital platform. The result is a monumental sculptural installation in the bath house of the Justus van Effencomplex, that serves as an ode to the contemporary worker.

While industrial society was based on the direct relationship between capital and labour, the current socio-economic agenda is about networking and offering surplus value. Economic prosperity can now be reached without too much labour. With this shift, the risks for the working class have also shifted. In an industrial society, the risk of exploitation was avoided through the creation of trade unions. In a network society, as a worker one constantly feels the pressure to show one’s value. Wenn ich nicht hier bin, bin ich auf’m Sonnendeck—if I’m not here, I’m on the sun deck—suggests to take a breather, to take a break from the computer, stop working and take a moment to recover and fantasise about a better future.

With his exuberant and often post-apocalyptic sculptural installations, Büttner offers a critical perspective on present-day issues of labour, power, and alienation. For his exhibition at A Tale of A Tub, Büttner presents his newly commissioned sculptural installation alongside three recent works which deal with the relationship between human and mechanised labour.

The possibility of another life expresses itself directly in a cop car on fire and obliquely in the faces of my friends (2019), commissioned by the 16th Istanbul Biennial, can be seen in A Tale of a Tub’s basement. The work comprises several human-sized sculptures formed out of different earths, each of which has the skeleton of a machine underneath. From ancient entombed terracotta soldiers until today, rulers have employed masses whose power lay not in kinetic, but in semiotic force. The sculptures resemble a mixture between sci-fi warriors or riot police and ceramic soldiers turned upside-down. Beginning to vibrate and shake, the sculptures respond to a world of algorithms and networks which have lost control or turned violent, unleashing a kind of Golem in the form of a machine.

The piece Untitled (Free Energy) (2018), also on view in the basement of the monumental Justus van Effencomplex, is centered around the work of DIY ‘free energy’ engineers, an active community on YouTube, using their alchemy to produce devices like perpetual-motion machines, cold-fusion generators, torus-based generators, reverse-engineered extraterrestrial technology, and other generally unproven, low-cost energy sources. The work is ‘powered’ by crystal batteries made with alum crystals. These batteries are intended to work for hundreds of years as they theoretically charge themselves. Oscillating between truth and fiction, science and myth, and playing on our lack of ability to fact-check assumptions driven by conspiracy theories, this work generates alternative narratives, which can, given the right rhetoric and framing, be as real as any other fictionalised story we designate as truth.

The exhibition concludes with paying tribute to Rotterdam as a working-class city. In the early 1990s, the pounding sound of construction sites and harbour activity inspired the beat of the hardcore music genre gabber. This radical electronic music style soon took over the Rotterdam party scene, with raves being held in legendary venues like the Energiehal and club Parkzicht. The development of gabber music in Rotterdam has often been related to the industrial sounds of pounding ‘heipalen’, the driving of building piles, that characterised the soundscape of the city. The hammering sound of Büttner’s Untitled (Survivalist) (2017)—a collaboration with Bastian Hagedorn—together with city noise and effects from the iconic drum machine Roland TR-909, form the soundtrack for an installation that is both aggressive and lyrical.

Wenn ich nicht hier bin, bin ich auf’m Sonnendeck is supported by the Municipality of Rotterdam, the Mondriaan Fund, and the C.o.C.A. Foundation.