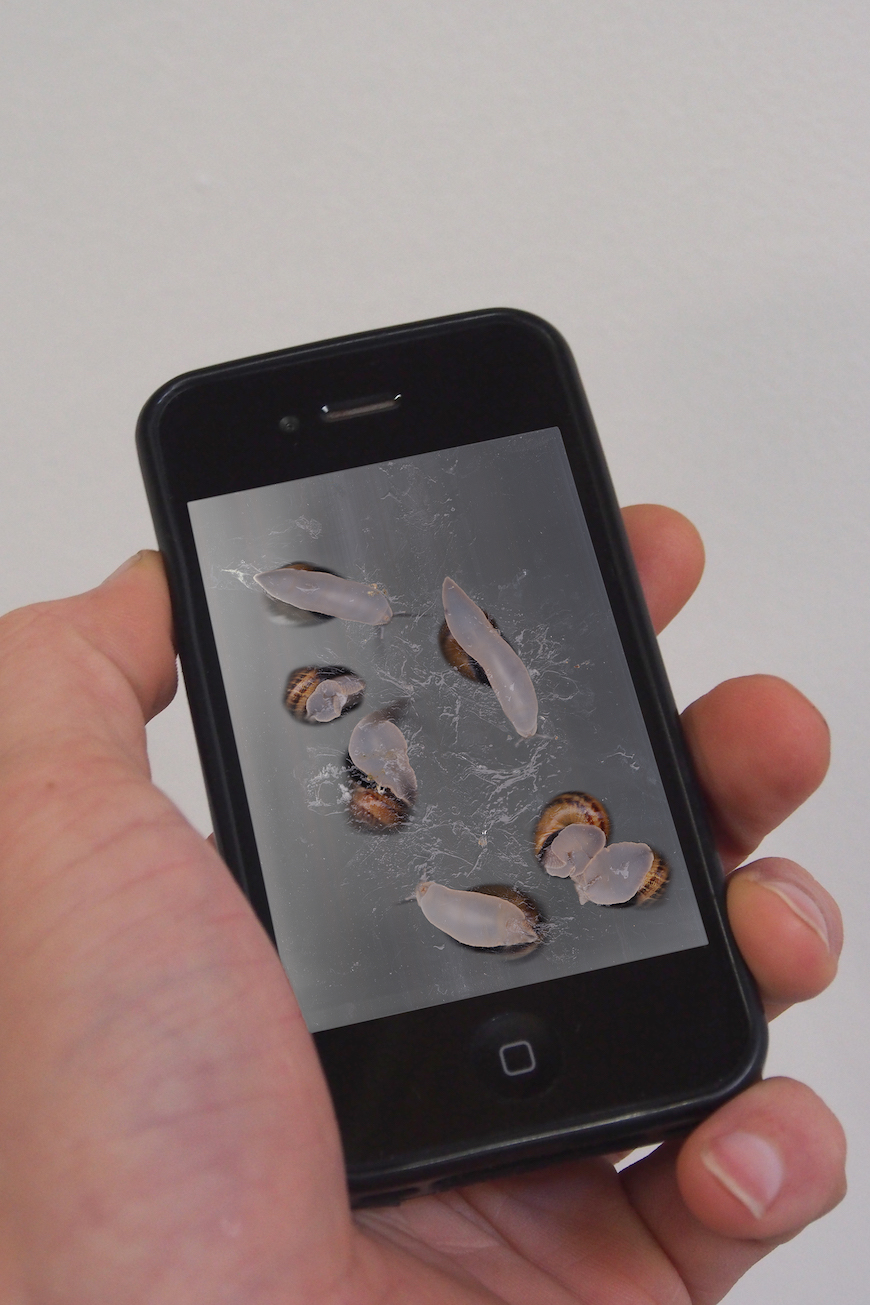 Forming part of a larger, long-term research into the possibilities of a new life elixir, Geelen employs the exhibition Sliding under Traces to make the first subjective and associative links between an apparent paradox in which the promise of rejuvenation and immortality, self-preservation and mortality is combined. Fascinated by ancient myths around rejuvenation and immortality, Paul Geelen has spent the last months developing a presentation that focuses mainly on the first ingredient: the present-day cosmetic phenomenon of rejuvenation products (age-killers) in the form of snail slime.

Within his artistic practice Geelen focuses on the large, often elusive facets of life, including time and human existence. He is driven by a boundless curiosity about contrasts and paradoxes, contained by seeming oppositions in life and death, natural and artificial, introverted and monumental. His work is perhaps best seen as fundamental and applied research into the grey areas and gaps between and within these abstract concepts. In a subtle and poetic way, Geelen’s work offers the viewer an open view on the working processes that are hidden behind notions of rejuvenation and immortality. In doing so, his work is ofen characterised by a spontaneous and process-oriented working method, in which he observes and tries to adopt scientific knowledge, processes and experiments. Conducting fieldwork and meeting with experts from different disciplines forms a substantial part of his working process. For that reason Geelen traveled to Chile—where the origin of snail slime’s cosmetic qualities were discovered, for its ability to rejuvenate the skin and restore scar tissue—in order to learn about the production process and how he could extract the snail slime himself.

From conducted fieldwork to a new patchwork of meanings, a number of interventions are presented at A Tale of A Tub, in the exhibition Sliding under Traces. These include, amongst others, an extraction of the snail slime, also known as Helix Aspersa Muller—a chemically and complex mixture of proteoglycans, glycosaminoglycans, glycoprotein enzymes, hyaluronic acid, copper peptides, antimicrobial peptides, and trace elements including copper, zinc and iron—as well as a sculptural presentation of a snail habitat and a sound recording. Striking here is the relationship between Geelen’s scientific interest and the resilience and durability of the materials he uses. By employing organic and volatile materials such as snails and the liquid they produce, Geelen highlights the unstable and volatile results of his experiment in a sculptural installation that is constantly becoming, but never quite arriving. As the title of the exhibition implies, the artist’s relationship to matter remains unstable. Whilst realising the work, Geelen has to continuously relate to the characteristics, qualities and performance of the entities he deals with. This uncertain relationship and interaction offers a desirable post-human dimension within the exhibition: an important departure point to bridge the gap between susceptibility to emotions, affects and relationships, since it no longer give preference to human ways of encountering and assessing the world, but instead seeks to investigate how others see and interpret the world—take, for instance, the environment of the snail. In other words, pursuing a plurality of perspectives—without dismissing the notion of the human—that makes it difficult to speak truthfully and universally about something that is considered human.

Ultimately, the exhibition Sliding under Traces shows the result of an intensive working process that balances itself between science, alchemy and artistic practice. By applying scientific chemical processes within an artistic context, the exhibition seeks to generate new values and meanings, particularly questioning the associations between organic matter and the mystical, seemingly ambiguous concept of a life elixir, or rather the repetitive manufactured promise by the cosmetic industry. Building on the rejuvenating properties of snail slime, for the next step Geelen will focus on a bacterium that was recently discovered on the slowly decaying, oldest preserved mummies in the world. More specifically, he will focus on the preservative substance Sphagnum (peat moss), an extract from Hoogveen, a protected region in the Netherlands, which has led to preservation of bog bodies. Whilst operating in a precarious atmosphere and under climate change, Paul Geelen’s research focuses on the fusion of various raw materials originating in animals (snails) and plants (peat moss). One element moisturises, whilst the other preserves—rejuvenation (progressive) and preservation (conservative) comprise the basic principles that form an ambivalent mixture...

Sliding Under Traces is supported by the Pauwhof Fund and the City of Rotterdam.