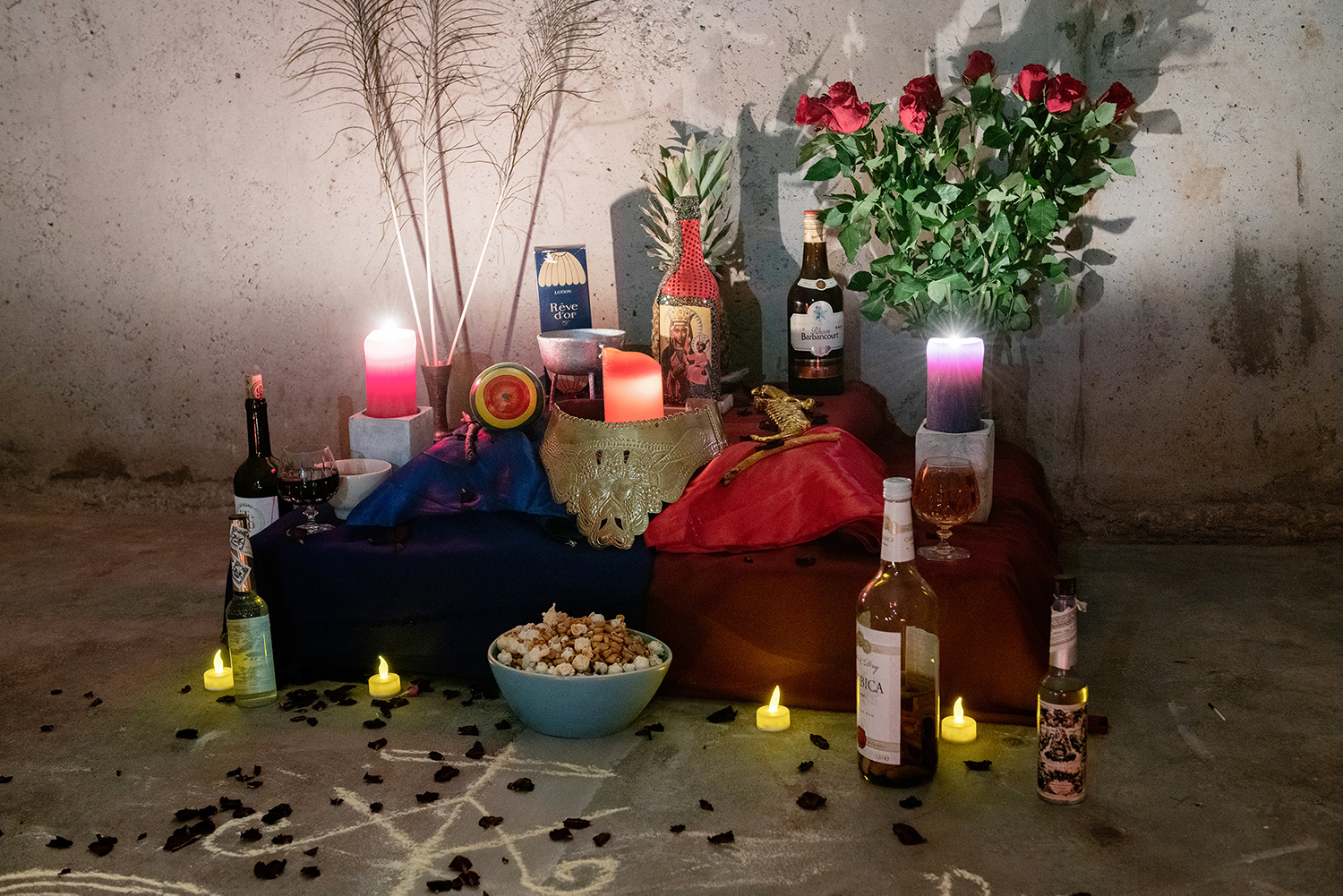 The exhibition Grenouille du Sang (blood frog) explores how ‘possession’— in Haitian Vodou as well as in other spiritual movements such as Hauka, Santeria and Winti—shape works of art and encouraged discussions around post-colonialism and exoticism. Through the figure of the zombie, the symbol of the snake and the veneration of the altar, the exhibition stimulates a spiritual journey where the body transforms and becomes a tool for reflection and healing.

The title of the exhibition Grenouille du Sang (blood frog) refers to the novel In the Palm of Darkness (1995) by Puerto Rican author Mayra Montero. The book recounts the story of two men, an American herpetologist and a Haitian guide, who are searching for the mythical and magical "Grenouille du Sang": a blood-red Eleutherodactylus sanguineus, an elusive near extinct species of amphibian. The story is filled with zombies, madwomen, ghosts and witches, and offers an important contribution to postcolonial ecocriticism by drawing parallels between the various species of frogs that are disappearing and the tortured history of the Haitian people.

The zombie figure is an ideal figure to reflect on the relations between society and nature as it embodies a variety of cultural fears, ecological disasters, and political extremisms. The popular icon has its origins in the Haitian experience of slavery and the plantation economy, and was subsequently transformed into the fundamental symbol of alienation under capitalism. Haitian ethnologist and writer René Depestre summarised its relation by arguing that: The history of colonisation is the process of man’s zombification. In the exhibition, this process is embodied in Gaëlle Choisne's film trilogy Cric Crac  (2013-2015). She combines an extensive amount of archive material, found footage from the internet, and extracts from interviews to explore the figure of the zombie and its role in Haitian identity. Through these references from pop culture, vodou rituals and postcolonial studies, we discover that the zombie is still very much alive in Haiti, yet its image is filled with misconceptions and exoticism.

Vodou, also spelled Voodoo, Voudou, Vodun or in French: Vaudou, is a creole religion created by descendants of Dahomean, Congo, Yoruba and other African ethnic groups who were enslaved and brought to colonial Saint-Domingue (as Haiti was then called) and Christianised by Roman Catholic missionaries in the 16th and 17th centuries. The word Vodou means 'spirit' or 'deity' in the Fon language of the African kingdom of Dahomey (now Benin). Spirit possession plays an important role in Afro-Haitian religion, as in many other world religions. During religious rites, believers sometimes enter a trance-like state where the devotee can eat and drink, perform stylised dances, give supernaturally inspired advice to people, or perform medical healings or special physical achievements. In the example of the zombie, the concept of 'possession' in combination with the body can be understood by examining the relationship between African religions in the Atlantic and the capitalist-driven economies which shaped these cultures. As Silvia Federici stated in her 1998 book Caliban and the Witch: The human body, and not the steam engine, and not even the clock, was the first machine developed by capitalism.

Les Maîtres Fous (The Mad Masters) (1953-54) is a film produced by the French anthropologist and filmmaker JEAN ROUCH, and centers on an annual Hauka possession ceremony which took place near Accra, the capital of the then English colony of the Gold Coast. During the ceremony, the possessed individuals were transformed, via a trance state, into symbolic caricatures of British colonial-power personalities. Les Maîtres Fous has generated controversy as many viewers found it to have a colonialist perspective, exoticising 'primitive' practices and reinforcing negative stereotypes. According to some anthropologists the Hauka movement was a form of resistance largely done to mock their authority by stealing their powers. Yet other anthropologists have criticised this analysis, arguing that the imitation in the ceremony is a way for the indigenous people to gain rights and status in the colonial society. Their adoption of the European customs were not so much a form of resistance, but rather a way to be respected by the Europeans. As the Hauka movement died out soon after the film was shot, we will probably never be certain about the precise meaning of the witnessed ritual.

MARKUS SELG is interested in the relationship between technology and spirituality, and the difference between the 'real' or authentic image and what is reproduction or imitation. In 2013, Selg travelled for the first time down to Benin, West Africa, to study the religion of Vodun. The religion is an animist sect based on the idea that all objects possess a soul. Selg sees art in the same way; that works of art are the containers of thoughts and ideas. The hypnotising video work Schlange (Snake) (2015) follows the artist's ideas around spirit bearers and authenticity in a digitalised and globalised world. The snake has been associated with some of the oldest rituals known to mankind. In Benin, it is seen as the source of all life, and as snakes shed their skin through sloughing, they are symbols of rebirth, transformation, immortality, and healing.

The theorisation around possession falls into broadly two varieties: one that entails the transformation or replacement of identity (executive possession, like the Hauka possession above) and one that envisages possessing spirits as (the cause of) illness and misfortune (pathogenic possession). The project Contesting Madness by NATALIA SORZANO was inspired by a book about the Surinamese spiritual Winti practice and her own experience with Santería. Sorzano began by facilitating conversations with a series of people living in the city of Rotterdam who had different relations to magic and the mental health system in The Netherlands. Parallel to these conversations, Sorzano conducted research between western epistemology and mysticism. This led her to create links between the history of 'madness' in Europe, and the way it travels across the ocean projecting its fantasies, fears and prejudices to the colonies. The video in the exhibition, The Animal, is the first of four chapters of the project Contesting Madness and is accompanied by a painting, wall drawings and sculptures of snakes. The video is divided in two parts: a degrading imposition of animality in our perceptions of madness, and an embodiment of the animal within us and thus a proximity to nature that questions our notions of sanity.

For Grenouille du Sang FLORIS SCHÖNFELD created a functional altar for Haitian vodou lwa or spirit Erzulie Dantor. The work is the artist’s attempt to honour this powerful spirit whom he first encountered in Port-au-Prince in 2011 during a ritual commissioned by the artists as part of the Second International Ghetto Biennale. Central to the altar is a 16mm projection film shot by the artist in Port-au-Prince, consisting of a series of portraits of members of the congregation (or vodouisants) in a state of possession by spirits who have been invited to attend the ritual. The film is projected onto a gold leaf surface that has been applied to the wall of the space. Next to this hangs a replica of the icon painting The Black Madonna of Częstochowa, which in Haiti is associated with the spirit Erzulie Dantor. Like the projection, the icon was originally painted on a gold leaf surface to emphasise its holiness. For the opening of the exhibition, the altar will be consecrated by Vodou priestess Mambo Maria. She will ask spirit Legba Petro to open the door so that Maman Erzulie Dantor can come down and grace us with her presence. This door will remain open for the duration of the exhibition and will act as a channel of communication with the deity to provide consolation and healing for the visitor.

Grenouille du Sang is supported by the Municipality of Rotterdam and the Mondriaan Fund.