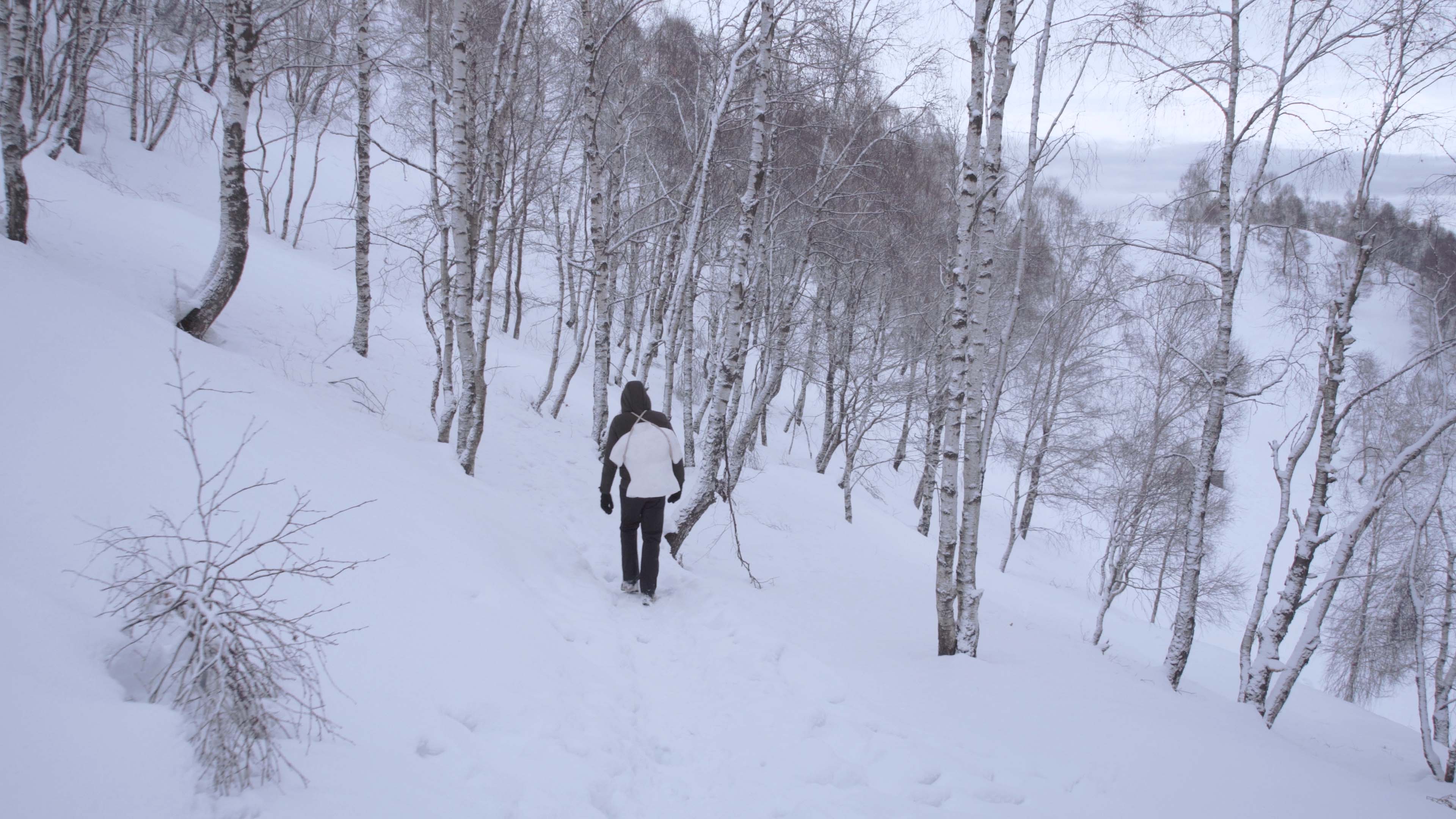 Over Time is a three-channel video installation that explores the relationship between human beings and the natural environment, which has always been at the center of Laura Pugno’s research, through the lens of snow, a matter both powerful and vulnerable, which conditions climates, life systems and economies. The project is the winner of the IX edition of the Italian Council (2020), the program to promote Italian contemporary art in the world by the Directorate-General for Contemporary Creativity of the Italian Ministry of Culture.

A matter with a mysterious appeal, which seems to belong to an eternal time, snow has always been an attraction for explorers, scientists and artists; an ever-changing substance and at the same time solid memory of the world; a metamorphic element that underlines the transitory nature of our journey on Earth. Starting from the historical seduction that this element exercises on the human soul - its ability to generate beauty, emotions and visions - Over Time explores, updating them, the reasons for our emotional bond and our need to live, study and recreate snow in the time of climate emergencies and global warming.

The narration of Over Time, accompanied by music specially created by the sound artist Magda Drozd, opens on three scenarios.

In the first video, set at 2,901 meters above sea level, near the Angelo Mosso Institute, located on the Passo dei Salati, in the Monte Rosa massif, Michele Freppaz, a snow expert at the University of Turin, is engaged in a series of scientific analyses on snow. Like every year in the winter period, the researcher reaches this location to record and evaluate the qualitative and quantitative characteristics of the snowpack.Observing his conduct, the conventional collective imagination of science as something that observes and studies the natural world through analytical and detached eyes disappears. The approach to the investigation and study of the state of the snow’s health is mediated by a strong use of sensory and experiential components. The scientific analysis, which evolves using visual observation, as well as tactile and sound evaluations, suggests a synesthetic reading method for the material that composes snow, casting an unprecedented light on the figure of the scientist. The loving gestures that the snow scientist reserves for his dearest patient and the sense of great respect that emerges from his actions create the image of a science that opens up to the study of the world without forgetting that it is matter and spirit at the time. The solitude of the researcher, immersed in this “mantle of mysterious beauty” , – hard at work to share his message of concern or perhaps of hope to the world, – reveals a strong sense of physical and emotional participation, evoking the image of a modern-day Cassandra.

The second video, set inside a factory near Cremona, documents the production process of spray snow. The images alternate between shots of the laboratory in which the chemical formula of this substance is created, the moments in which its qualitative characteristics are evaluated, and the packaging phases. The camera’s lens enters the machine, which the contemporary world has entrusted with the task of artificially recreating memories, sensations and emotions related to snowy landscapes. The fascination exerted by the possibility of reproducing the magic of Christmas is combined with the sense of drama for the possibility of a future, in which all that remains of winter is pressurized inside the metal of a spray can. The platoon of aluminium containers, animated by the movement of the conveyor belts, carry compounds towards homes all over the world, where snow in the form of a simulacrum risks gradually replacing emotions and sensations of an authentic nature.

In the third video, made in the woods of the Zegna Oasis, the camera focuses on a human figure that is walking in a snowy landscape. The viewer’s eyes follow the unstoppable progress of the figure. It is a body on a journey, without a set destination, apparently disinterested in the sublime beauty that surrounds it, insensitive to the intoxicating natural force in which it is immersed. The different shots allow us to observe the figure’s progress at times from a close position, at times from aerial shots. He is alone, in an indefinite time, lowered into a suspended dimension. Laura Pugno chooses this image charged with metaphors to bring into the work the whole of humanity, on whose shoulders the weight of their condition and responsibilities rests. The symbolic experience of the crossing offers a series of possible readings: a final time, the scene of a farewell with snow or perhaps a new time of redemption, in which a white bath between white messengers becomes a cathartic experience of regeneration and awakening.The reverential delicacy with which Laura Pugno develops the narrative of the work and her way of telling the profound relationship between us humans and snow, has the flavour of caring. It is “the caring of the world” to quote the philosopher Elena Pulcini, the “caring of the Titan who desperately wants to be a human again”, crossed by the “boundless nostalgia of his own limitation, fragility and vulnerability” . It is the testimony of a time of transformation, of the need for a new affective awareness that regenerates in us a sense of empathy with the universe that surrounds us. By choosing snow as the spokesperson for this message, Laura Pugno fuels an extremely urgent ecological reflection. Moreover, she does so by resorting to the power of beauty, the one hidden among the physical laws of creation, in the inexplicable perfection of nature, a substance that nourishes our soul and quenches our body until the last snowflake falls on Earth.

Over Time is supported by
The Italian Council (9th Edition, 2020), program to promote Italian contemporary art in the world by the Directorate-General for Contemporary Creativity of the Italian Ministry of Culture

A project produced by
a.titolo

With the patronage of
Comune di Gressoney-La-Trinité