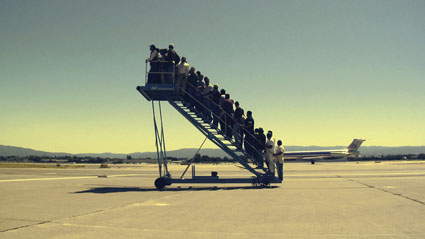 A Tale of A Tub and EYE present the film program The Migrant (Moving) Image. The program sheds new light on the migration crisis from an artistic perspective. Writers Kader Abdolah, Abdelkader Benali, Bas Heijne and theater director Ola Mafaalani respond to the artworks shown in the program. After Rotterdam, Berlin, Ramallah, Marrakech, Miami and New York we stir up the conversation in Amsterdam about an alternative image of a society in which migration is an inescapable fact and is inextricably linked to our contemporary social, political and economic reality.

During these two evenings we reflect on the realities of those people who are forced to live without identity documents across political and social boundaries and we talk about the possibility of breaking fixed forms of identity.